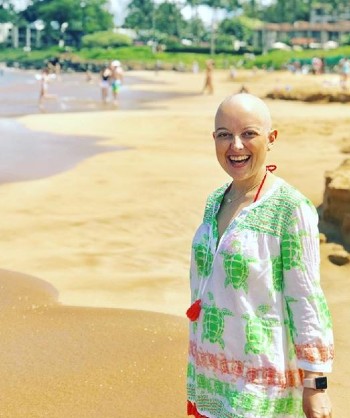 Dr. Ashley Elizabeth Campbell Lindley, 33, passed away August 10, 2019 in Birmingham, Alabama at the end of a long battle against pancreatic cancer. She was the beloved wife of Simon Lindley. Ashley and Simon, along with their dachshund Cooper, shared 8 years of marriage and adventures together.

Ashley arrived in this world on New Year’s Day 1986. She was born to the late Brian Campbell and Karen Arwood, Growing up in LaFollette and Morristown, Tennessee, Ashley was very active in the First Presbyterian Church of Morristown and contributed in many areas of service, especially with her music and within the Youth Group. Ashley graduated from Hamblen-Morristown West High School and then headed to Alabama to attend the University of Alabama, Huntsville. At UAH she earned undergraduate, masters and doctoral degrees in physics. Her doctoral dissertation was on Calculating Cluster Masses via the Sunyaev-Zel'dovich Effect. After earning her doctorate in astrophysics, Ashley’s professional life commenced working for the United States Missile Defense Agency. Later, she worked for Northrop-Grumman Corporation working on national defense programs.

While at UAH, Ashley pledged the Lambda Kappa Chapter of Delta Zeta Sorority and was a dynamo of energy and enthusiasm with friendship and kindness all around her. She continued her service to her sorority sisters in Delta Zeta as an Alumna Collegiate Chapter Delegate and recognized by Delta Zeta’s 35 under 35 program for her outstanding professional accomplishments.

She was a member of Grace Presbyterian Church of Madison, Alabama; Rotary International, Madison, Alabama chapter; the Huntsville Symphony Orchestra Guild; the North Alabama Photographers Guild and Huntsville Photographic Society. Ashley was an accomplished musician who enjoyed playing flute, piano, organ, dulcimer and handbells. She was honored by the Huntsville Community Ballet Association for her contributions to emerging arts.

Ashley is survived by her husband, Simon Lindley, her beloved dachshund, Cooper, her mother Karen Arwood and grandparents Alfred and Virdie Warren and Shirley Campbell.

Her funeral will be Saturday August 17 at the First Presbyterian Church at 10:30 a.m followed by a graveside service held at the Hamblen Memory Gardens. Funeral services will be held August 17th at the First Presbyterian Church, 600 W Main St, Morristown, Tennessee followed by a graveside service at Hamblen Memory Gardens. Ashley wasn’t one for dark colors so to celebrate her spirit, bright colorful clothing would be appreciated at the services. Visitation will be from 6-8pm, Friday August 16th at Stubblefield Funeral Home, 5421 Andrew Johnson Highway, Morristown, TN. In lieu of flowers, donations in Ashley’s memory can be made to the Shriners Hospitals for Children (https://donate.lovetotherescue.org)